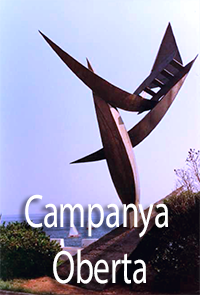 Exit a l'expedició catalana a Belgica

The 15th Belgian Opens took place from Sunday 19 till Tuesday 21 of July at Twinsclub Bredene, the epicenter of patin sailing at the Belgian Coast.

Splendid weather conditions ruled this event. The sky was mostly sunny and a 14-19 knots WSW breeze spoiled the patin sailors. The Race Committee, led by Dirk Sledsens on a very competently way, succeeded to organize the maximum of 7 regattas during these three days.

The attendance of a team of 9 Junior sailors from Catalonia didn’t stay unnoticed. These boys and girls from 12-17 year old and trainer Oriol formed a training group which some of our Juniors were eager to join. Finally, the Patin Junior fleet started with 15 competitors. Jan Heuninck, present Spanish and European Champion, with Flemish roots, won before the Catalan girls Nina Esteba and Paula Martin. Nathan Bossuyt became the First local Junior on a fifth place amid the Catalan force.

The Patin Class knew 20 competitors. Although the racing was not free of collisions and misunderstandings, the fair and friendly atmosphere typical to Patin sailing was predominant. Twinsclub provided the competitors and their companions with a most stylish regatta-polo and a delicious select barbecue the First evening. The concluding waffle baking after the last race – in pure Belgian comic strip tradition – was also a direct hit.

The Catalan Quim Esteba turned out to be the convincing winner of the Championship Patin. Simon Lerno ended second and took for the third consecutive time the Nosepasa Trophy of Belgian winner. The ever consistently sailing Bernard Bossuyt became third. After female absence for a few years, we could welcome this championshup the ever smiling, young Elise. Kristof with the young patinairos Robbert and Baptiste formed the podium of 2° category.

All competitors express their appreciation for all who contributed to the success of this Championship : Race Officer Dirk Sledsens and Jury and delegate of the Federation Freddy Vergauwen; the skipper and crew of the Navigator, the Twins boys in the RIBS, the ladies at the Race Secretary and scoring. The foreign traineeship and participation was an extraordinary contribution, thanks to the impulse of Wim & Isabelle and the supportive care of instructors, beachmaster and trainer. And in conclusion our sincere thanks to Johan, Patrick, Nathalie, Ann and the whole Twinsclub crew !